Important Zoning Changes Are Coming – What You Need to Know

Back in October 2021, Labour and National came together in a rare show of unity to address New Zealand’s housing shortage. Megan Woods of Labour and Judith Collins of National stood on stage together to announce big changes to New Zealand’s intensification laws that will drastically peel back the current restrictions facing property development.

What makes this more significant than previous government reforms is that much of these rulings are mandatory, as opposed to a guideline for councils to interpret. Furthermore, this is a bi-partisan announcement, so is not likely to be altered by changes in government.

This is music to the ears of urban planners, developers, first home buyers and anyone who has been championing the ‘build up, not out’ approach over the past few decades. With PWC modelling predicting the MDRS changes alone could result in between 48,200 to 105,500 additional dwellings being built in the next five to eight years, we are likely to see a boom in small scale property development (particularly when the current financing and construction headwinds are resolved).

Not all feedback has been positive however and there are plenty of wrinkles to iron out before this is deemed a roaring success. Some parts will depend on how the individual councils implement these changes, as while some changes are mandatory, others are a directive from the government for the councils to then go away and tailor specific zoning for their regions.

The Auckland Council have been one of the first to provide their draft plan, which was open for feedback from April 19 to May 9. The council will then take on that feedback, and notify formal changes by Mid-August. Other councils are following a similar consultation process with a different government directive depending on whether they are classed tier 1, tier 2, or tier 3. In my next blog, I will examine the first draft of the Auckland Council’s new zoning plan and the impacts this will have on New Zealand’s biggest city.

For now, I will give a general overview of what the government has instructed, and what they hope these changes will achieve.

There are two elements to what has been announced.

The first is the new Medium Density Residential Standards (MDRS) as part of the amendments to the Resource Management (Enabling Housing Supply and Other Matters) Act.

The second is the fast-tracked implementation of the National Policy Statement on Urban Development (NPS-UD) by one year. Tier 1 councils must now notify changes by August 2022 and be operative by August 2023 as opposed to August 2023 & 2024.

These directives from the government are specific to the tier of the council. Tier 1 councils are the main urban areas - Auckland, Tauranga, Hamilton, Wellington and Christchurch.

The purpose of this act is to accelerate the supply of housing to NZ’s main urban areas by removing restrictive policies that prohibit intensification.

This bill focuses on the suburban zones outside of the high-density areas covered in the NPS-UD. The bill establishes new ‘medium density residential standards’ that tier 1 councils will be forced to adopt. This means that our biggest cities will no longer have vast single house zoning areas and will now have to allow the building of up to three dwellings, up to three storeys, without the need to apply for resource consent.

The medium density residential standards going forward are as follows: 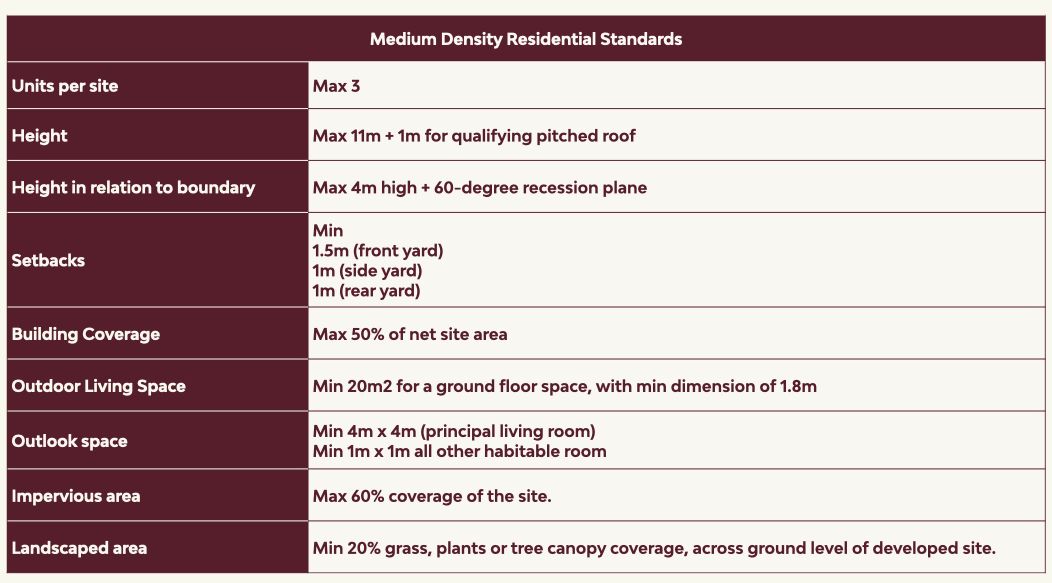 For those familiar with the Auckland Unitary Plan, these rules are similar to the Mixed Housing Urban Zone currently in place.

Of course it doesn’t make sense for these rules to be applied blanketly across every site. Places where the MDRS won’t apply are rural zones, large lot residential, and where “qualifying matters apply”. Qualifying matters can be a range of things, from heritage orders, iwi participation legislation, or simply anywhere that MDRS is deemed “inappropriate”. For an example of how these may be interpreted, look out for my next blog where I show the areas in Auckland where qualifying matters will apply.

The NPS-UD is a directive set by the government, aimed at providing councils with a long term vision, structure & guidelines for urban planning. The new NPS-UD was announced in July 2020, replacing the NPS-UDC from 2016. Much of the new policies were planned to be notified in 2023 but have now been brought forward to August 2022 to match the timeframe of the new MDRS.

The NPS-UD seeks to intensify metropolitan hubs near public transport, community services and jobs. While the MDRS focuses on medium density across the board, the NPS-UD focuses on higher density living in the places that can accommodate such activity.

“This (NPS-UD) is about ensuring New Zealand’s towns and cities are well-functioning urban environments that meet the changing needs of our diverse communities. It removes overly restrictive barriers to development to allow growth ‘up’ and ‘out’ in locations that have good access to existing services, public transport networks and infrastructure.” Source.

The full text is available to read here, however the most significant changes are:

1. (Policy 3) Tier 1 councils to allow for at least up to six-storey buildings within walkable distances of the following:

Note - the definition of rapid transit listed in the NPS is any existing or planned frequent, quick, reliable and high-capacity public transport service that operates on a permanent route (road or rail) that is largely separated from other traffic.

Note - The distance that is deemed walkable is up to the individual council’s interpretation, but in the case of Auckland it has been proposed as 1200m from the city centre and 800m from metropolitan centres and rapid transit stops.

2. (Policy 11) The removal of minimum car parking requirements from the district plans of tier 1, 2 and 3 territorial authorities.

This policy has come with its supporters and detractors. Those in favour feel getting rid of car parking requirements will allow developers to provide more affordable housing options as they can now squeeze in more units per site. They feel that the private market will determine the need and value of car parks to a developer.

Those against say it will only heighten congestion issues, as more cars will be searching for fewer spaces. It will be vital that tier 1 councils take appropriate measures now to manage on-street parking for years to come.

Personally, I am concerned with the consequences this policy could have. Particularly in less affluent suburbs, where people will be more inclined to choose the cheaper home and forgo a car park. Will these areas have sufficient local infrastructure and amenities to accommodate for the increase in population and potential lack of parking?

So, what does this all mean?

Overall, these changes are a step in the right direction to help New Zealand cope with inevitable increases in population and bring house prices back to an affordable level. The NIMBY’s out there cannot complain about housing affordability whilst simultaneously opposing terraced housing – you can’t have your cake and eat it. Furthermore we cannot complain about our public transport not being up to the standard of European cities when we continue to build ‘out’ and not ‘up’. Unfortunately the kiwi ideal of owning a quarter acre section with a back yard is no longer realistic for everyone, and as a nation we must adapt to modern living just as other countries before us have done.

Sure, there will be issues that arise that will need to be managed carefully, but hopefully the appropriate tweaks can be made as needed by each council. Increasing the supply of housing is only one piece of the puzzle, the other pieces (parking, transport, stormwater, amenities etc) need to improve at matching speed. Let’s hope that good urban design and aesthetics are not sacrificed for greed and speed of delivery.

Look out for my next blog where I use Auckland as a case study to examine how this legislation will alter the Auckland Unitary Plan.

What You Need to Know about the Changing Auckland Unitary Plan

We take a deep dive into how recent zoning changes will affect the Auckland Unitary Plan.

The Benefits of Pre-sales

Pre-sales are a form of risk management. This is why often it is a pre-requisite for finance and lenders

What can New Zealanders expect from the budget? The short answer is money.